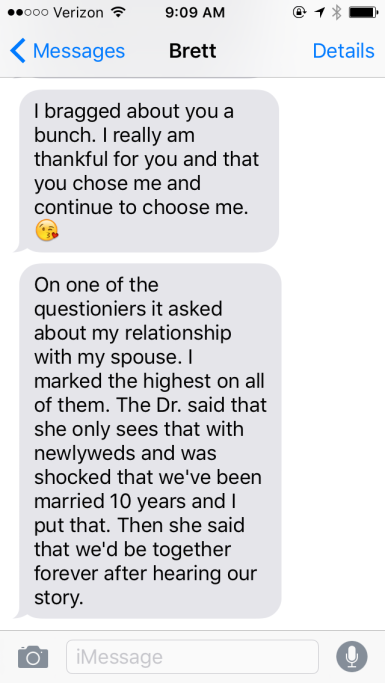 Brett and I celebrated our 10 year anniversary last week on June 2nd. That day, a friend teasingly asked us to share all the wisdom we’ve gained from being married that long. I have been pondering on that question since, and one thing keeps coming up. I have learned to appreciate and embrace the trials of life as things that grow me into a more beautiful version of who God created me to be, rather than see them as a mark of shame that I cannot hide.

I know all personalities are different and many people probably read my statement above and think I’m stating the obvious. But this was a hard lesson for me. If I could go back twelve years and have a chat with my 18 year old self, I would love to let me know I do not need to fear mistakes or pain. When I was 19, I was carrying with loads of heavy pain that I didn’t have tools to deal with. In the midst of a drinking binge, finding out my boyfriend at the time had been cheating on me, and a tough day at school, I decided facing the pain and shame of it all was too much and tried to end my life. Waking up sober in the intensive care unit alive seemed even worse as the shame began to pour in from my small community. I remember reaching out to a God I didn’t know yet for three days and asking Him to let me rewind time. I begged him to let me go back two weeks and make different choices and erase the scarlet letter I’d just embroidered on my own chest- permanently engrained in my skin. I prayed this for three days, but on the third morning, I still woke up in the hospital bed and realized the big guy in the sky wasn’t going to cooperate with my plan to erase my mistake. I decided then that He didn’t exist and I would do it all on my own.

I look back now and see my greatest heart desire was not to learn and grow but to remain perfect, unmarked by life and to show only perfection to the world around me. I was filled with fear of man and controlled by other’s opinions of me. Thankfully, I started seeing a counselor at the time who helped me realize some of this and helped me gather the courage to pursue my dreams of a degree from the University of Utah. That fall, I packed my bags with my tail between my legs and headed back to Salt Lake City for another try. This time, I swore off boys and was determined to graduate with honors and get into law school as quickly as possible. I met Brett the night before our classes started.

When Brett and I were dating, one of our constant arguments was that he wanted to be the never ending class clown and I wanted to portray that we had it all together at all times. I would criticize what he wore, what he said, how he behaved, and it drove him crazy. Obviously, the choices he made to live a secret life are his responsibility, but I look back now and can understand part of what drove him to hide so much from me. Due to my own insecurities, I attempted to control his every move and he was dying for some freedom. This never leads to a healthy marriage. By our first anniversary, I wanted a divorce as he was driving me crazy. By our second anniversary, I had given my life to Christ and He was making some big changes in me. I was slowly morphing more into the version of me that I was created to be. By our third anniversary, Brett was beginning to come under the conviction of the Holy Spirit and shortly thereafter, he confessed to having lived a double life the past few years. He’d been lying to me about almost everything. As he sat in our home, pouring out the truth, walking in the light, and asking me to give Jesus the chance to save our marriage, I kept thinking of the “mark” this was tainting our marriage with. I knew we’d never be the same clean cut, picture perfect, adorable American family I dreamt of us always being. We had a real problem that could end it all if it wasn’t dealt with in truth and in the light. I was heartbroken to say the least.

We spent the next 18 months in intensive counseling with a Spirit filled psychologist who didn’t put up with my control issues. During that time, we began to choose Christ, His ways, and each other. I repented for wanting “perfection” more than the beautiful reality that was in front of me and began to slowly embrace the life I was living. I began to choose Brett as he is rather than trying to make him fit the mold I thought he should be. Our counselor nearly screamed at me one day telling me it wasn’t my job to define a man or who Brett should be as a man. That was Brett and Jesus’ job alone and I’d better get out of the way so they can work it out together. (Wives, this is a powerful truth that has changed my marriage. If you don’t yet know this, learn it and walk it out as soon as possible. I know it is opposite of what our American culture teaches today, but it is truth and life to your husband, marriage, and children.)

Fast forward a few years to 2012. Brett and I had been bouncing all overt the country for his NFL career. We hadn’t spoken publicly about our marriage issues yet but we weren’t keeping them secret either. At a conference at our church, the key speaker called us up to share our testimony then honored us in front of hundreds of people and invited them to “sow into our marriage if they wanted one like ours.” We lost count of the people who came up to honor us and give us money for a late honeymoon over the next couple of days. My heart was wrecked. What I had previously seen as our greatest failure was now being celebrated by complete strangers as a major triumph. You see, that is what a life with Jesus can be. Now matter our failure, our blunder or our mistake- Jesus can work it for good. It doesn’t matter what pain we endure, loss we experience or death we face, Jesus can redeem, restore, and reconcile everything and anything that we give to Him. He has no limit other than the things we choose to withhold from Him.

As a hurting and lost 19 year old girl, I begged Him to erase my mistake of a suicide attempt and never let anyone know about it. His plans were so much greater. He has since removed every drop of shame and filled me with a love and compassion that is from Him for the lost and broken. That scarlet letter I embroidered on my chest so many years ago is now a faded scar that reminds me of His kindness, His superior plan, and His sovereignty over my life and other’s lives. It reminds me I do not need to fear my failures, but look to Him for all my answers. He is a good Father who cares for us far more than we can imagine. No matter how many times we stumble and “mark” ourselves, He is the great physician who comes in to do surgery, make repairs, and renew everything to better than it started. Some might ask, “then why would there still be scars?” Because that is our proof that we’ve been there, done that and come out even better on the other side. I have a scar from birthing both my children via cesarean section. I do not look at that scar with disdain but with pride of knowing I helped birth life through my body. I partook in a beautiful and crazy experience called birth and no one can take that from me. And now, I look back at Brett and my first 10 years of marriage and marvel at the beauty of the scars we bear together. Some are more recent and still healing. Some are faded and only we know they ever existed really. But they are all beautiful. They mark our journey thus far and although I do not wish for more pain or heartache in our future, I no longer fear the mistakes, learning lessons, and journey I know is ahead of us- marks and all.

One thought on “My Beautiful Scars”

What are your thoughts? Cancel reply